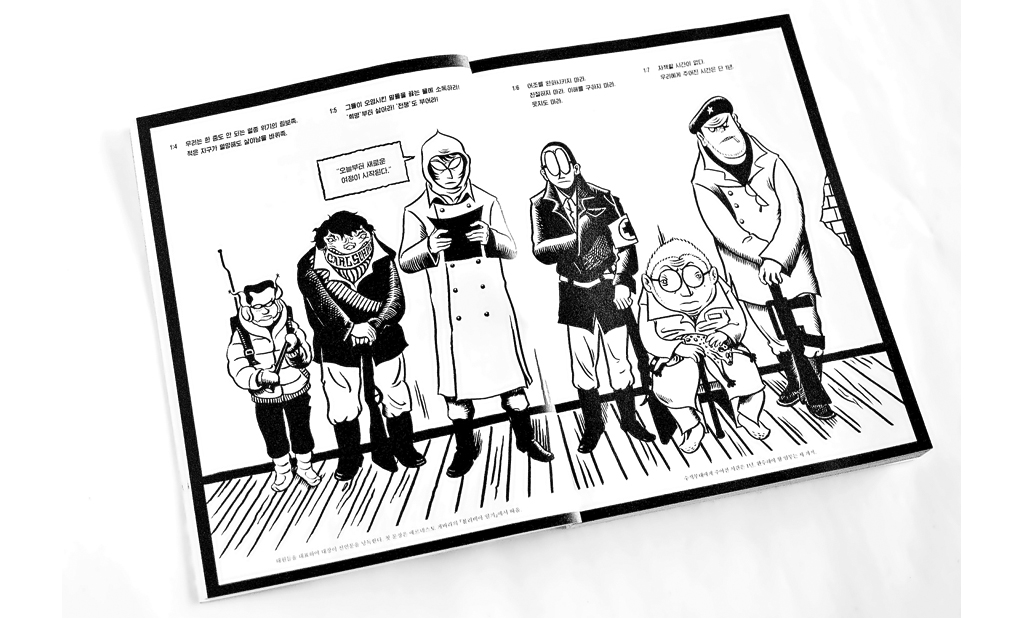 “Exiled from their own land”

The mission: find your Mirror.The deadline: one year.

A handful of people collectively known as Limbo, barely cling on the brink
of extinction in their habitat Country 82, a nation infested by the Roaches,
blind worshippers of immediate homeostasis and rampant breeding.

As a final attempt at self-salvation they form a temporary government, and by doing so
break their only creed of absolute ‘unbelonging’, in order to battle the Roach regime.
A party of six is formed, and soon war is waged. They undertake three missions:
strike the Roaches as hard as possible, secure an escape route, and find the Mirror.

Thrown into a gruesome, tooth-and-claw carnage lodged in the teeth of modern
commercialism, the Limbo’s very chance of existence is vehemently put to test.
But it is a battlefield only to those who have no choice but to engage in combat,
and a parallel paradise for the thriving, swarming, overwhelmingly dominant species.
Amidst their hopeless struggles, the Limbos have a lofty objective to accomplish.
Every Limbo needs to avert self-demolition at the imminent age of 34, and can only
be done by finding the Mirror, the only thing that will reflect one’s true self.
Without money or ammunition, support or organization, even retreat is insurmountable.
Exasperated by failed operations, the search party returns to headquarters two days
before the appointed dated of mission termination, only to find it empty. The leader
is gone without a trace, and no messages are left. Escape evaporates before their eyes.

Readers of previous books by Hanmin Kim may find surprising. It thrusts
itself boldly with a solemn, uncompromising face, neither begging for understanding nor
offering light-hearted laughs. The message is clear-cut as its black-and-white drawings.
does not describe the world as a battlefield, but depicts the battles painstalkingly.

The authorís poetic narrative and visual imagination empower the entire book in a way unique
to Hanmin Kim, including the will and power to reveal the disturbing, yet unavoidable truth.